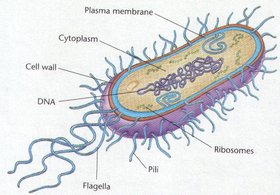 Under a microscope, archaebacteria look very similar to eubacteria. They are equally small, ]lack nuclei, have cell walls but chemically archeabacteria are quite different.

Many archaebacteria live in extremely harsh environments. One group of archaebacteria is the methanogens, prokaryotes that produce methane gas. Methanogens live in oxygen-free environments, such as thick mud and the digestive tracts of animals. Other archaebacteria live in extremely salty environments, such as Utah's Great Salt Lake, or in hot springs where temperatures approach the boiling point of water. Because prokaryotes are so small, it may seem difficult to tell one type of prokaryote from another. Prokaryotes are identified by characteristics such as shape, the chemical nature of their cell walls, the way they move, and the way they obtain energy.
Powered by